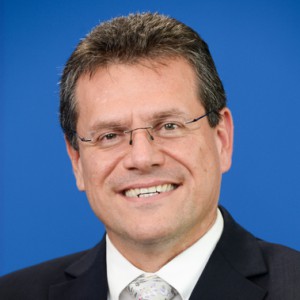 Maroš Šefčovič (born in 1966) is a Slovak career diplomat and since 1 November 2014 Vice President of the European Commission in charge of the Energy Union. In this capacity, he leads the "Energy Union" Project Team within the Commission which comprises of 14 commissioners.

In 2014 he was elected as the Member of the European Parliament. From 2010 – 2014 he was Vice President of the European Commission in charge of Inter-Institutional Relations and Administration. In 2009-2010, he was European Commissioner for Education, Training, Culture and Youth. From 2004 -2009, he was the Permanent Representative of the Slovak Republic to the European Union. As diplomat by profession he served between 1992 and 2004 in Zimbabwe and Canada and as Ambassador to Israel.

He graduated from the University of Economy in Bratislava and the Moscow State Institute for Foreign Relations. He holds a degree as Doctor of Law and a PhD of European Law from the Comenius University, Faculty of Law, Bratislava. He also studied at Stanford University, USA.

He has recently published a book on his first mandate as Vice-President entitled "Driving the EU forward – straight talks with Maroš Šefčovič" (John Harper Publishing, London 2014).