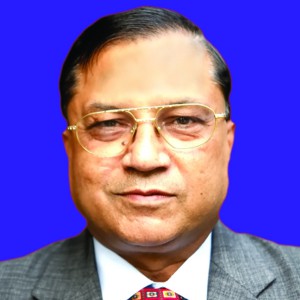 Dr. Adish C. Aggarwala (Gold medalist, Ph. D. in Law and designated Senior Advocate) is a dynamic high profile lawyer, writer and social activist. He had the rare distinction of serving as Senior Additional Advocate General of Government of Haryana and Additional Advocate General of Governments of States of Uttar Pradesh, Tamil Nadu and Punjab and Special Counsel and Senior Central Government Counsel in the Supreme Court of India.

He has been the youngest elected Vice-Chairman of the Bar Council of India (www.barcouncilofindia.org), which is the apex statutory body of lawyers constituted under the Advocates Act, 1961. As in-charge of legal education in India, Dr. Aggarwala was responsible for the closure of more than 150 sub-standard law schools across the country. He is credited with raising standards of legal education and

has established 140 new law schools. He is a visiting faculty in many reputed law schools in India and abroad.

He has the rare distinction of creating new records in Bar Association elections from Sub-Division to Supreme Court levels. In 1998, for the first time in the history of Bar Councils, two brothers Dr. Adish C. Aggarwala and Mr. Satish Aggarwala won the election at the same time.

He has also been singularly conferred with the honour of looking after the matters of Govt. of India as its Senior counsel, under the Prime Ministership of Mr. Rajiv Gandhi, Mr. V.P. Singh, Mr. Chandra Shekhar, Mr. P.V. Narasimha Rao, Mr. H.D. Deve Gowda, Mr. I.K. Gujral, Mr. Atal Behari Vajpayee, Dr. Manmohan Singh and Mr. Narendra Modi. He has had the rare distinction of serving as Additional Advocate General of Punjab, Haryana and Tamil Nadu simultaneously – all three states remaining under the governance of different political parties opposed to each other.

Started writing from his school days, Dr. Aggarwala was the Editor of Vaish College, Rohtak’s magazine. He also edited an English fortnightly “Socialist Age” from New Delhi and Rohtak for twelve years. The special issues of the fortnightly were released by the then Presidents of India Mr. Fakhruddin Ali Ahmed in Ashoka Hall of Rastrapati Bhawan and Giani Zail Singh in Mughal Garden of Rastrapati Bhawan, the then Prime Ministers Mrs. Indira Gandhi and Mr. Rajiv Gandhi and the then Information & Broadcasting Minister Mr. Inder Kumar Gujral.

His book titled “The Constitution of India” has been released in 2008 by the Prime Minister of India. The Hon’ble Chief Justice of India Dr. K.G. Balakrishnan contributed its Foreword and Hon’ble Union Minister of Law & Justice Dr. M. Veerappa Moily contributed its Preface. The Appreciation was contributed by Hon’ble Mr. Justice P. Sathasivam, Judge, Supreme Court of India. There was a special presentation ceremony at the Rastrapati Bhawan where the Hon’ble

President of India Smt. Pratibha Devisingh Patil received the book. The second revised edition of the Constitution of India was received by the Hon’ble Prime Minister Dr. Manmohan Singh on November 25,

His other book (alongwith eminent British author) “Narendra Modi – A Charismatic & Visionary Statesman” (published by U.K. Publishers &   Distributors, London) was released in 2015. His other three books titled (1) “India - My India” (2) “Concept of International Law” (3) “Saint Mother Teresa - A Living Legend” will be released in 2017.

Dr. Aggarwala has widely travelled in India and abroad (130 countries). He has represented India in many international conferences and seminars. He has also been the representative of the Prime Minister in such conferences and seminars. He has had the rare opportunity of being the guest of the White House to have a breakfast meetings with both, Bush Sr. and Bush Jr. and twice with President Clinton. He has participated in more than 5000 functions in different parts of the world as special guest of honour. Special write-ups on him have appeared in international dailies, TVs and Radio.