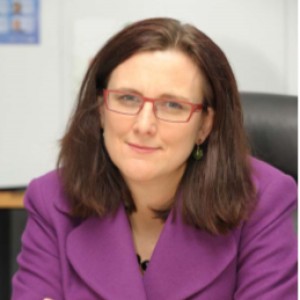 As EU Commissioner for TRADE since 1st November 2014, Mrs Malmström is pursuing an ambitious trade agenda to the benefit of European citizens, SMEs and the broader economy. She is representing the EU in the World Trade Organisation (WTO) and other international trade fora. She is negotiating bilateral trade agreements with key countries, including reaching a balanced and reasonable Transatlantic Trade and Investment Partnership (TTIP) with the U.S. that respects Europe’s safety, health, social and data protection standards, and our cultural diversity.

As EU Commissioner for Home Affairs 2010-2014, she was responsible for the European Commission’s work within the fields of asylum and migration, police cooperation, border control and the fight against organised crime and human trafficking. Formerly a Member of the European Parliament and Minister for European Affairs of Sweden. As Minister for European Affairs, Malmström was responsible for issues such as the Lisbon Treaty, the EU strategy for growth and employment and the review of the EU budget and for the preparation and co-ordination of the Swedish EU Presidency.

Cecilia Malmström has a Ph.D. in political science and was a researcher at Göteborg University in Sweden for several years, teaching in European politics. On Twitter: @MalmstromEU. Website: ec.europa.eu/malmstrom