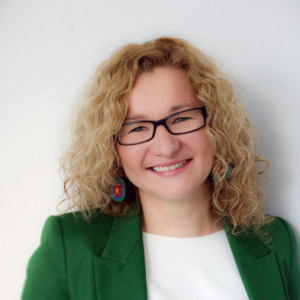 Pedagogue, trainer, coach, animator of social changes, working in non-governmental organizations for twenty years. Since 2006 she has been the president of ISKIERKA Foundation.

She thinks and acts unconventionally, often joining two totally different worlds or environments. She successfully uses her coach experience in organizing trainings for medical staff touching the problem of communication with the little patient or solving problems occurring in the situations of long-term treatment. She conducts interpersonal, motivational, integrational and communicational trainings for business showing how their potential can be used in social activity.

She started her social activeness in Association for the Protection of Children’s Rights and Dignity ‘Wyspa’. It was then that she discovered important areas of problems as well as great needs of the environments at risk of exclusion. In 1993 she began to cooperate in realizing activation programs or the ones preventing unemployment for local societies e.g. Team of Trainers and Animators ‘SIEĆ’, Polish Psychological Society and Center for Citizenship Education.

ISKIERKA Foundation appeared in the teeth of extreme trauma that is child’s illness.
In 2003 her son developed an acute myeloid leukemia. She took advantage of all her competence and created a special program for her son which was based on positive attitude towards his illness. She started to share her experience with other parents soon.

At present ISKIERKA Foundation is an organization supporting children with cancer and realizing numerous national projects. It aids financially, psychologically and socially over 500 wards and their families. /www.fundacjaiskierka.pl/