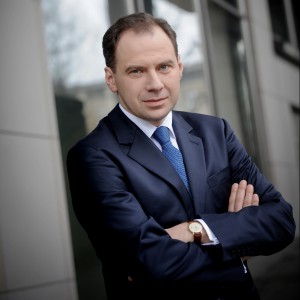 Legal Counsel. MA from the Faculty of Law, University of Warsaw, and British Law Studies, University of Cambridge. In 1997-2004, he worked with the Polish Securities and Exchange Commission, among others as Counsel to the Chairman of the Commission and Press Officer of the Commission. In 2004, he was appointed Head of Cabinet of the Minister of the State Treasury, where he co-ordinated restructuring processes and the introduction of companies with a stake held by the State Treasury to public trading. In 2005, he was appointed Undersecretary of State in the Ministry of the State Treasury responsible for ownership supervision of State Treasury companies. In 2006-2009, he was Management Board Member of the investment fund company PKO TFI S.A.

He is also involved in education. Since 1999, he has been a lecturer and Director of post-graduate studies at the Higher School of Finance and Management in Warsaw. He also gives lectures at the Business Development Institute, Euro Finanse, and Twigger. He has co-authored books on issues of municipal bonds and the rights and responsibilities of shareholders in public companies.

He has sat on Supervisory Boards of companies including PKN Orlen S.A., BGŻ S.A., BondSpot S.A., PKL S.A., Tramwaje Warszawskie sp. z o.o. In 2003- 2013 Member of the Council of the District Chamber of Legal Counsels in Warsaw (Deputy Dean of the Council since 2010). Currently he is a Member of the PZU Foundation.