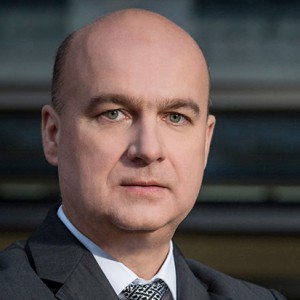 Born in 1969. Graduate of the Faculty of Electrical Engineering and Automatics at the Opole University of Technology. Completed post-graduate courses in accounting, finance and power engineering at the Wrocław University of Economics.

He has been involved with the power sector since the beginning of his career. In 1994, he started work as Manager of the Operator Services Department at the Opole Power Distribution Unit. He served as Director of the Distribution System Management Department at EnergiaPro, and was Head of the Operator Services Office at Tauron Dystrybucja. He was a member of the Technical Committee of the Polish Standardisation Committee (PKN). In recent years, he held the positions of Distribution Director at the company’s Gliwice division and Director of the Distribution Services Sales Department.

Since 2002, he has been a member of working groups established at the Polish Power Transmission and Distribution Association (PTPiREE), working on projects related to the energy market, smart metering, and power sector regulations.

Since 2017, he has served as President of the Polish Power Transmission and Distribution Association.