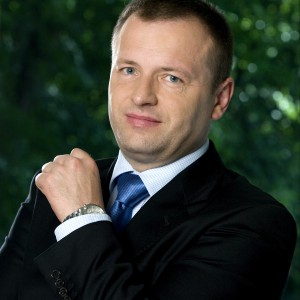 Senior Manager, expert in the fields of financial markets, management, IT system development and security, and operational risk management.

Graduate of the Cybernetics Department at the Military University of Technology, completing an MA in IT studies and post-graduate IT studies. Post-graduate PhD studies in Economic Science, specialising in Management Science, at the Warsaw School of Economics. Completed the Advanced Management Program (AMP) at the IESE Business School of the University of Navarre. Holds an ITIL IT infrastructure management certificate from the Examination Institute for Information Science (EXIN).

Has been closely involved with KDPW – the Polish central securities depository – since 1999. Member of the KDPW Management Board since 2006 and Deputy President of the Management Board since 2009. From 2011, also Deputy President of the KDPW_CCP clearinghouse, which was separated from the structures of KDPW. Responsible in both companies for technology, operations and corporate security. Has overseen numerous projects aimed at raising the standard and range of post-trade services, preparing and adapting the Polish financial market to outside competition and to international standards. Key achievements include: implementation of the kdpw_stream depository-settlement system, EU authorization of the KDPW_CCP central counterparty clearinghouse, the launch and registration (in ESMA – the European Securities and Markets Authority) of the KDPW Trade Repository, and overseeing the launch and EU authorisation of services involving assigning Legal Entity Identifiers (LEI).