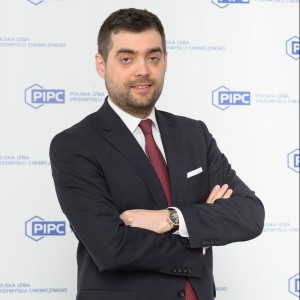 PhD in technical sciences, a graduate of the MBA program. A graduate of Chemical Technology at the Faculty of Civil Engineering, Mechanics and Petrochemistry of the Warsaw University of Technology, Branch in Płock, as well as Postgraduate Studies in Finance and Marketing Management at the Warsaw University of Technology. He also studied at the Vitus Bering Center for Higher Education in Horsens, Denmark. In 2004-2006 he worked at PKN ORLEN SA, holding managers positions. Until 2009, he also operated his own business in the field of business consulting. At that time, he was also the Managing Director of the Center for Innovation and Technological Investments and managed the Department of Technological Investments at AKJ Capital S.A. (2006-2007). Then in 2007-2008 he was a Partner at the Institute of Energy Studies. He continued his career at DGA S.A. as Director of Strategic Projects in the Business Advisory Department (2008-2009). From 2009, he was the Vice-President of the Management Board, Director of Strategy and Development at Zakłady Chemiczne "Police" S.A. (Grupa Azoty at present). In 2010-2013, he worked again in the ORLEN Group, where he worked in Anwil S.A. as a Member of the Executive Management Board and Director of Strategy and Operations. At the turn of 2012/2013, he was the acting President of the Board of Chemeko, a member of the Anwil Group. In 2011-2013, he was also a Board Member of Fertilizers Europe in Brussels. For years, a member of supervisory boards of commercial law companies. He is also the Vice-President of the Association of Polish Inventors and Rationalizers, a member of the Presidium of the Chemistry Committee of the Polish Academy of Sciences, Assistant Professor at the Faculty of Management at the Warsaw University of Technology, Councilor and Member of the Presidium and Council of the Polish Chamber of Commerce.

From June 2013, as the President of the Board, he manages the Polish Chamber of Chemical Industry. He is also a member of the Board of Directors of the European Chemical Employers Group ECEG in Brussels and a member of the National Association Board in the European Chemical Industry Council CEFIC in Brussels, where he represents 7 chemical sector organizations from Central Europe.