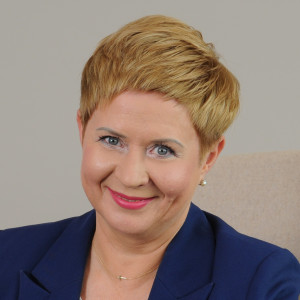 She graduated from Adam Mickiewicz University in Poznań. Since 9 December 2014, she has been the Mayor of Ostrów Wielkopolski. In the 1980s, she was an employee of the Ostrów Centre of Culture. She had spent 10 years working in the media (radio, local and regional press). From 2000 to 2014, she was a local government’s employee of the Poviat Eldership in Ostrów Wielkopolski. In the years 2010- 2014 she was a member of the City Council of Ostrów Wielkopolski. Since December 2014, she has been the president of The Ostrów Friendly Foundation. She is a member of the Society for the Protection of Monuments. She organized a lot of social actions in Ostrów Wielkopolski, such as: series of concerts "Summer afternoons with music"; projects such as: "Practical use of dance values in the process of rehabilitation and improvement of elderly, ill and disabled people", "Senior – do not let to be cheated” or The Ostrów Women's Forum. Since 2015, she has been a member of the Team responsible for Functional Metropolitan and Urban Areas as part of the Joint Commission of Government and Local Government, Programme Council of the Smart City Forum and the vice president of Kalisz – Ostrów Agglomeration. Since 2017 she has been a member of the Scientific Council of the Urban Spaces Forum. In her local – government activity, she focuses primarily on family-friendly policies and on obtaining external funds for investment development projects. In 2017 and 2019, she was awarded in the Ranking of the Best Polish Mayors N15 published by “Newsweek”. She was also awarded in the “Pearls of Local Government 2017” ranking in the category of “mayor – the municipality up to 100,00 of inhabitants”, organized by Dziennik Gazeta Prawna /Daily Legal Newspaper/. Winner of the 2nd distinction “for exceptional social support and initiatives directed to residents” in the contest organized by THINKTANK and partners of the Ranking of Leaders of the Cities of the Future 2017. She is the finalists of “The Innovation in Politics Awards 2017 and 2019” organized by the “The Innovation in Politics Institute” in Vienna. On October 21, 2018, she was re-elected to the office of the Mayor of Ostrów Wielkopolski in the first round of elections (she received 65.15% of votes), from the list of the Beata Klimek Friendly City and District election comitee. On November 19, 2018, she was formally sworn in as the Mayor of the City, in the eighth term of office of the local government (2018-2023).