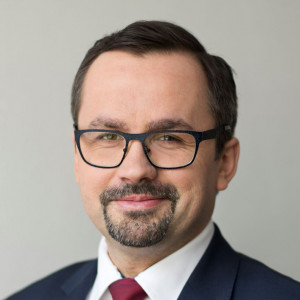 Marcin Horała – Polish politician, Member of Parliament. Secretary of State at the Ministry of Infrastructure, the Government Plenipotentiary for Solidarity Transport Hub of the Republic of Poland.

Marcin Horała was born on October 2, 1981 in Gdańsk. He graduated  from the Law and  Political Science Faculties of the University of Gdańsk. After graduating he worked at  the Baltic Container Terminal in Gdynia. He also served as an expert of the Republican Foundation for local government and maritime economy. He authored a book titled “Wyprawa do polskości” (Expedition to Polishness) and many journalistic articles (in e.g. “Wiadomości Gdyńskie, “Nasz Dziennik” or “Rzeczy Wspólne”).

In 2006 he was elected a councilor to the Gdynia City Council and held this position until 2015. In that capacity, he started many initiatives and outlined guidelines for Gdynia, including increasing  competences of district councils, introducing participatory budget or revitalization of run-down districts.

In October 2015 he was elected to the Sejm of the Republic of Poland, having received 10 546 votes. During the 2015-2019 term he served as the head of the investigative committee on VAT fraud. He is the author of the desideratum of the Maritime Economy Committee, which paved the way for key infrastructural investments in Gdynia, as well as of the report on VAT fraud between 2007-2015, which put forward conclusions of the investigative committee.

Marcin Horała received 86 079 votes in the 2019 parliamentary elections. At the beginning of the current term, in November 2019, Prime Minister Mateusz Morawiecki appointed him as the Secretary of State at the Ministry of Infrastructure, as well as the Government Plenipotentiary  for Solidarity Transport Hub of the Republic of Poland. He holds both offices until today.