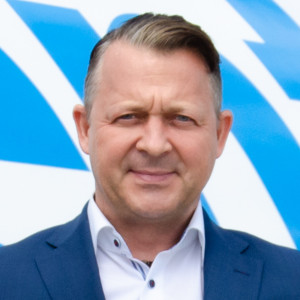 Position: Member of the Management Board, Commercial Director

He graduated Warsaw University of Technology from the Faculty of Power and Aeronautical Engineering. Postgraduate he specialized in Airline Management at the Technische Universität Berlin. After returning to Poland, he completed PH.D. studies at the University of Insurance and Banking and London Business School in the field of risk and safety management.

Mr. Andrzej P. Kobielski has many years of experience in aviation management. He started his career at PLL LOT S.A. in the commercial division of the Company in 1997. He held managerial positions in this company until 2004. From 2004 till 2006 he was acting as a Director Network and Revenue Management in Centralwings, first Polish LCC. In years 2006-2009 he held the position of  Commercial Director at the British airline BMI Baby. In 2009 he created a profit center  -  LOT Charters, within the structures of PLL LOT S.A. At the same time, he founded and managed the new TTO - LOT Travel. As a co-founder of the business plan of the largest Polish leisure airline Enter Air, which materialized in 2010, he continuously manages the Company as a Chief Commercial Officer.

For the last four years he holds a position of the President of the Board of Airlines Representatives in Poland - BARIP.