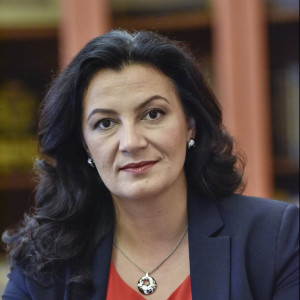 Chair, Committee on Ukraine’s Integration into the European Union, the Verkhovna Rada of Ukraine; Deputy Prime Minister of Ukraine for European and Euro-Atlantic integration 2016–2019

Ivanna Klympush-Tsintsadze is a Member of Verkhovna Rada of Ukraine and holds position of a Chair Parliamentary Committee of Ukraine's integration into European Union. Before being elected as Member of Ukrainian Parliament she served from 2016 to 2019 a Deputy Prime Minister for European and Euro-Atlantic integration. From 2014 to 2016 she was a Member of the Ukrainian Parliament, served as a First Deputy Chairperson of Foreign Affairs Committee and led Ukraine's Parliamentary Delegation to NATO PA.

For 5 years (2002-2007) Ivanna was the Radio BBC Ukrainian Service correspondent in the USA (Washington D.C.) and in the Caucasus (Tbilisi).

From 1998 till 2002 she worked for the East-West Institute’s Kyiv Center as a Project Manager and for one year carried out the responsibilities of EWI KC’s Acting Director.

Ivanna began her career in 1993 year as a Project Manager at the Ukrainian Center for Independent Political Research (UCIPR) in Kyiv, and later became the Head of the Department of International Relations in UCIPR.

In 1992 she completed the course "History of Ukraine. Ukrainian Literature" at summer school of Harvard Ukrainian Research Institute of Harvard University (USA).

Mrs. Klympush – Tsintsadze  was born on July, 5th, 1972 in Kyiv. She is married and has two daughters.