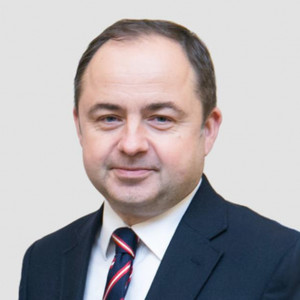 Konrad Szymański was born on 6 December 1969 in Kalisz.

In 1993-1997, he was an expert of the Committee on Local Government of the Poznan Municipal Council, and from 1997 an adviser to the chairman of the Polish delegation to the Parliamentary Assembly of the Council of Europe. In 1997-1998 he worked for the Chancellery of the Sejm; in 1999-2000 he advised Deputy Speaker of the Sejm and was a member of the political cabinet of Minister Kazimierz Marcinkiewicz (the chief of Prime Minister Jerzy Buzek’s political cabinet).

In 2004-2014, Konrad Szymański was a member of the European Parliament from the Law and Justice Party (PiS). He sat on the Committee on Foreign Affairs (AFET) and the Committee on Industry, Research and Energy (ITRE). In 2015 – 2019 he held a post  of Secretary of State for European Affairs in the MFA.

On 15 November 2019, he was appointed as Minister – a member of the Council of Ministers and on 5 March, 2020 as Minister for European Affairs.