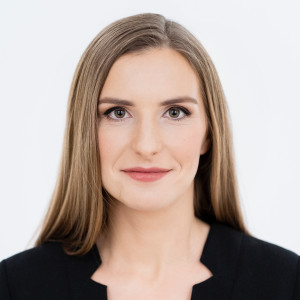 Head of the Team of Advisers to Władysław Kosiniak-Kamysz, President of the Association of Women at the Center

President of the “Women at the center” organization, focused on promoting gender equality in Poland. Magdalena is working as a chief advisor of Mr. Kosiniak-Kamysz and she is responsible for agenda of Koalicja Polska.

She was a campaign manager in presidential campaign of Władysław Kosiniak-Kamysz. Before joining Mr. Kosiniak-Kamysz team she worked in the European Commission as a communication advisor and speechwriter for Commissioners. She worked in EC from 2016 till 2018 mainly on issues concerning space, defense and SMEs. In years 2015-2016 she worked as a chief correspondent in Brussels for main evening news in Poland called Wiadomości.

She covered European affairs, Paris and Brussels attacks, UK elections and plane crash in
Alps. Before she moved to Brussels she worked as a journalist in polish national television TVP and private Polsat. She covered mostly politics, domestic and international, concerning the 2012 United States Presidential elections  and 10th anniversary of 9/11 attacks.

Also, she was a host of morning political show. She is working on her PhD on Warsaw School of Economics, covering COVID impact on global economy . She has graduated diplomacy and international economy.
In 2016 she took part in The German Marshall Fund Young Professionals  Summit in Brussels. She has graduated School for Political Leaders and course on multimedia journalism in Thompson Reuters Agency London. Magdalena is an author of publication: Transatlantic trade and investment partnership – chances and threats.