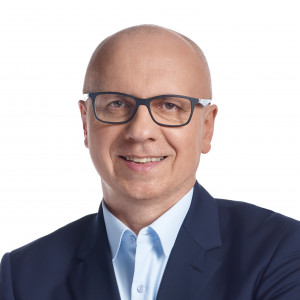 He is an economist and a transport engineer by education. Graduated from the Silesian University of Technology and the Wrocław University of Economics and Business.

He has been a part of the rail freight transport market during his entire career, which started in 1994 in PTKiGK in Rybnik, where he was responsible among others for transport management in sidings and rolling stock management. Next he took the position of Director of Controlling to pursue his career in finance. In 2006 he became Managing Director and a year after, CEO of PTKiGK in Rybnik. Two years later after ownership transformations of the company, he took the function of Board Member for Finance in PCC Rail S.A. and later on in DB Schenker Rail Polska.

In July 2014 he took the position CEO of DB Schenker Rail Polska, after changing the name in April 2016 DB Cargo Polska, one of the largest rail logistics operator in the country. In February 2019 he was appointed Board Member for Production at DB Cargo AG in Germany.

Under his management, DB Cargo achieved better punctuality in rail transports and implemented measures to stabilize production processes. As of May 2020, he returned to his position of CEO of DB Cargo Polska.