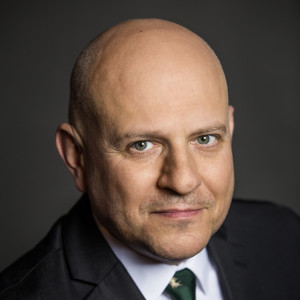 The President of the Friendly State Foundation (Fundacja Przyjazny Kraj), journalist, former deputy business editor in „Gazeta Wyborcza” and wyborcza.biz, where he covered the area of financial market: stocks, bonds and corporate governance.

In 2011 he received the Journalist of the Year 2011 Prize form the Polish Association of Individual Investors. Besides, he received an honorable mention in the competition: “The Directions of the Polish economy by 2005” (1996), the Eugeniusz Kwiatkowski Award by the Krakow Academy of Economics (1997), “Sharp Pen” by Business Centre Club (2000), "Citigroup Journalistic Excellence Award” (2004), Award "FERK” (2004).
In 2004 he received the Special Award in the contest for investigative journalists called "Only Fish Don’t Take Bait?”, organized by The Stefan Batory Foundation (2004). He was also nominated for the Grand Press Journalist Prize (2003, 2012) and awarded with an honorable mention by the Polish Journalists Association (2007).