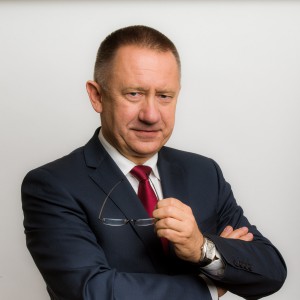 He graduated from Primary School no. 37 in Katowice, then from the No.1 Mikołaj Kopernik Secondary School.

Studies: Silesian University of Technology in Gliwice, Faculty of Architecture

He was to become a doctor – he became an architect

He completed a 3-year internship after his studies in the Building Conglomerate in Katowice, working at the post of Construction Site Manager

Later he became the director in the expatriate company “Radimex”

Along with his friends he established one of the first limited liability companies in our region “Przedsiębiorstwo Usług Technicznych i Realizacji Budownictwa PUTiRB L.L.C.”

Then 1987 he established his own company “PRB Holdimex L.L.C.” It is  a real estate development company which has been on the market for over 30 years! The company purchases land and develops it by building residential and commercial buildings.

In 2004 he established the Katowice School of Technology which is the first non-public technical and artistic university in our region. The school was created as a response to the needs of inhabitants supplementing the available offer of institutions of higher education with the following fields of study:

In 2008 he established the TVS television channel. It is directed mainly to inhabitants of Silesia but is available thanks to cable networks and digital platforms all over the country as well as abroad. At the end of 2017 the station once again launched news services.

In 2013 he started Radio Silesia 96.2 FM. The station now broadcasts from its new offices in Zabrze.

In 2015 he launched the “Silesia” Science and Technology Park at KST. The park is responsible for research and training.

In 2016 he built an office building in Katowice at the intersection of Kościuszki St. and Gawronów St. which makes its own electrical energy with the use of photovoltaic panels and a trigeneration turbine. The main power supply for this is the building elevation.

At the present he is preparing to complete another office building which will also create electrical energy and store it in specifically designed batteries.

He is married with two children.