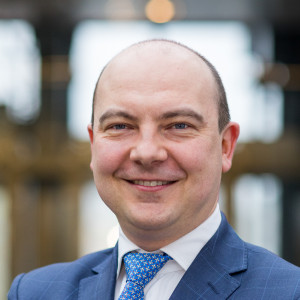 School of Economics graduate, he studied at the Faculty of Law at the University of Warsaw. Specialist in the fields of financial advisory for companies, banking (investment and corporate), mergers, acquisitions, restructuring, finance, management, the increase in value.

In 2008-2011, he worked with Experior Partner. In 2006-2008, he was associated with the Jastrzębska Spółka Węglowa, where he served as Vice-President of the Management Board, Director for Supervision and Capital Strategy Office. He coordinated, among others  project Budryk, merger with JSW and JSW development strategy works. In 2004-2006 he worked with BBK Poland as director. In 1999 - 2004 he was employed at Bank Handlowy Citibank, where he headed the Department of Restructuring and Finance Department of Commerce.