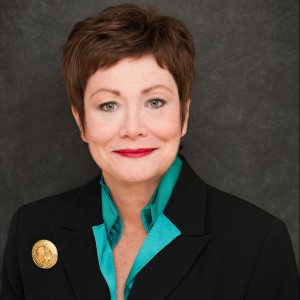 Position: former Under Secretary of State for Arms Control and International Security and former Member of Congress

The Honorable Ellen O. Tauscher is a former 7-term member of Congress and Under Secretary of State for Arms Control and International Security in the Obama Administration.

She currently serves on the University of California Board of Regents and as chairman of the Board of Governors for Los Alamos National Security, LLC (LANS) and Lawrence Livermore National Security, LLC (LLNS), a consortium led by the UC Regents. She also serves as Vice Chair of the Student and Academic Affairs Committee and Chair of the Labs subcommittee of the Board of Regents.

Tauscher represented California’s 10th congressional district in the House of Representatives from 1997 until June 27, 2009, when President Obama appointed her to the State Department during her 7th term in the House. She was confirmed by the United State Senate as Under Secretary of State for Arms Control and International Security Affairs on June 25, 2009. She served in this role until February 6, 2012. Tauscher served as special envoy for Strategic Stability and Missile Defense at the State Department from February 7, 2012 until her resignation from government service on August 31, 2012.

As Undersecretary of State for Arms Control and International Security Affairs, Tauscher negotiated the NEW START treaty with the Russian Federation in 2010 to further reduce the threat of nuclear conflict and oversaw other critical nuclear non- proliferation priorities around the world.

Prior to serving in Congress, Tauscher worked on Wall Street for 14 years and was one of the first women to hold a seat on the New York Stock Exchange.

In the House of Representatives, Tauscher chaired the Strategic Forces subcommittee of the Armed Services Committee, which oversees the country’s nuclear weapons stockpile, missile defense program, and the national labs. Tauscher was the only member of Congress who had two national labs in her district, Lawrence Livermore National Laboratory and the California campus of Sandia National Laboratory. At the time she left Congress, Tauscher also was the senior member from California serving on the Highways and Transit and the Aviation subcommittees of the House Transportation and Infrastructure committee.

While in Congress, Tauscher was a leading centrist Democrat, and the chairman of the New Democrat Coalition, a caucus of 65 moderate Democrats in the House of Representatives. She also served as vice-chairwoman of the Democratic Leadership Council from 2001 to 2005. Her fiscally responsible, bi-partisan, unique brand of leadership in Congress was coined "Tauscherism" by Time Magazine.

As Undersecretary of State, Tauscher represented the United States at the U.N. nuclear non-proliferation treaty (NPT) review conference, the first NPT conference in 10 years to result in a consensus agreement. Tauscher was also the lead official in the State Department negotiating the bilateral agreements with Poland, Romania, and Turkey for the European Phased Adaptive Approach missile defense system that allowed the President’s deployment timeline to be met.

Since leaving the State Department in 2012, Tauscher has assumed a number of publicly-held corporate and non-profit board positions, and currently serves on the boards of Edison International/Southern California Edison (EIX) in Rosemead, CA and eHealth (EHTH) in Mountain View, CA. Additionally, she serves on the Board of Advisors of SpaceX, the Board of Directors of BAE Systems, Inc, NTI, and the Executive Committee of the Atlantic Council. She serves as vice chair of the Atlantic Council's Brent Scowcroft Center on International Security.

In July 2010, Tauscher was diagnosed with Stage 3 esophageal cancer, one of the fastest growing cancers in the United States and one of the deadliest, with a survival rate of 18%. After a grueling regimen of chemotherapy, radiation, and surgery, Tauscher was declared cancer-free in December 2010. Subsequent to her treatment and surgery, Tauscher spent 5 years as a board member of the National Comprehensive Cancer Network (NCCN) and served as Chair of the NCCN Foundation. She has been an advocate for more education, more funding, and earlier screening for the disease.

Ellen Tauscher was born in Newark, New Jersey on November 15, 1951. The eldest of four children and the first member of her family to attend college, she graduated in 1974 from Seton Hall University, where she obtained a Bachelor of Science degree in early childhood education.

She began her 14-year Wall Street career with Bache & Co. at age 25. She served as an officer of the American Stock Exchange from 1980 to 1983, after which she worked as an investment banker for Bear Stearns and a subsidiary of Drexel Burnham Lambert.

In 1989, Tauscher moved to California and later founded the first national research service to help parents verify the background of childcare workers. She also published The ChildCare Sourcebook and headed the Tauscher Foundation, which provided funds for elementary schools to buy computers and Internet access.

Tauscher's most proud life work and accomplishment is her daughter, Katherine, a graduate of Bucknell University, where she was an English major and the Captain of the Bison's Division 1 Women's Volleyball team. Ellen and Katherine live in the San Francisco Bay Area.