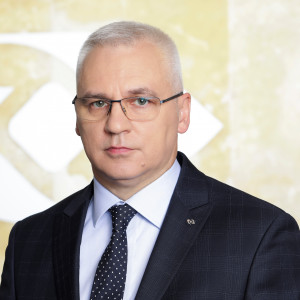 Grzegorz Fingas is a manager with long-standing experience in development of commercial strategies and managing a sales team, related to the PKP CARGO group since 2008.

From May 2008 he held a function of the PKP CARGO S.A. Commercial Office Director, and between 2010 and 2013 he was a member of the board of PKP CARGO International a.s. with its registered office in Bratislava. Since the moment he begun his professional career in 1988, Grzegorz Fingas held the following functions: BOT Górnictwo i Energetyka S.A. Marketing Office Director in Łódź (2005-2008) and department manager in the Statistical Office in Katowice (2002-2006). In 2003, Grzegorz Fingas graduated from master studies on the Faculty of Economics and Philology of the Higher School of Marketing Management and Foreign Languages in Katowice, specialty: Marketing Management of a Company, and in 2012 the MBS studies at the Gdańsk Foundation for Management Development. Between 2010 and 2014 he held a function of the Supervisory Board Member of Zakład Przewozu i Spedycji “Spedkoks” Sp. z.o.o., with its registered office in Dąbrowa Górnicza.