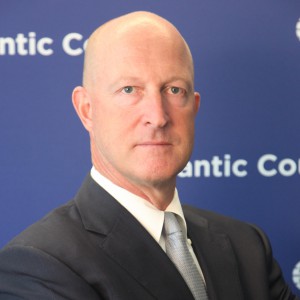 Ian Brzezinski is a Senior Fellow at the Atlantic Council’s Brent Scowcroft Center for Strategy and Security in Washington, DC. He brings over three decades of experience in U.S. national security matters having served in senior policy positions in the Department of Defense and the U.S. Congress.

Mr. Brzezinski served as Deputy Assistant Secretary of Defense for Europe and NATO Policy (2001–5). His office formulated, coordinated and executed bilateral and regional engagement strategies and defense guidance with the Joint Staff, Unified Combatant Commands and Department of Defense elements. His lead responsibilities included NATO expansion, Alliance force planning and transformation and NATO operations in the Balkans, the Mediterranean, Afghanistan and Iraq. Key highlights of his tenure include the expansion of NATO membership in 2004, the consolidation and reconfiguration of the Alliance’s command structure, the standing up of the NATO Response Force and the coordination of European military contributions to U.S. and NATO- led operations in Iraq, Afghanistan and the Balkans.

Mr. Brzezinski served for seven years on Capitol Hill, first as a Legislative Assistant for National Security Affairs to the Chairman of the Senate Finance Committee, Senator Bill Roth, (1995–2000) and then as a Senior Professional Staff Member on the U.S. Senate Committee on Foreign Relations (2000–1). In these capacities, he drafted and implemented legislative initiatives and strategies concerning U.S. interests in Europe, Russia, the Caucasus and Central Asia. As the staff coordinator of the Senate NATO Observer Group, he facilitated coordination and communication between the U.S. Senate and the executive branch on NATO enlargement, NATO operations in the Balkans and Alliance force modernization among other issues.
Mr. Brzezinski served as a volunteer in Ukraine (1993-94) where he advised the Ukrainian National Security Council, Foreign Ministry, Defense Ministry and Parliament. He served as a member of the Policy Planning Staff in the Department of Defense (1991–93), a Consultant to the Center for Naval Analysis (1991–92) and a Support Analyst/Information Assistant at the National Security Council (1986–7).

For his public service, Ian Brzezinski has been awarded the Department of Defense Medal for Distinguished Public Service; the Order of the Lithuanian Grand Duke Gedimas; the Latvian Ministry of Defense Award; the Romanian Medal for National Service, Order of Commander; and, the Order of Merit, Republic of Poland, Officer Class.