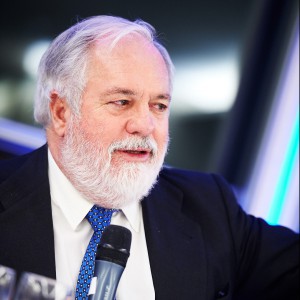 Miguel Arias Cañete is the European Commissioner for Climate Action and Energy. He has served in the role since 1st November 2014.

Born on 24th February 1950 in Madrid, Mr. Arias Cañete studied law at the Complutense University of Madrid. After graduating in 1974, he joined the Spanish Civil Service working as a State Attorney. In 1978, he became a professor of Law at the University of Cadiz. In 1982 he left his teaching post as he was elected a member of the Parliament of Andalusia until 1986. After serving in the Andalusian parliament, he became a Member of the European Parliament upon Spain’s accession in 1986. He stayed until 1999, heading the Committees on Agriculture and on Regional Development during his time as MEP.

Mr. Arias Cañete served as Minister of Agriculture and Fisheries of Spain from 2000 until 2004. He also served as Minister for Agriculture, Food and Environment in the Spanish Government from 2011 until 2014, before being selected to head his Party List in the European Parliamentary elections.