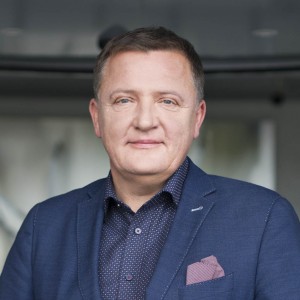 In 1990-1998 at the position of the Director in the IT Department of Pomorski Bank Kredytowy S.A.
In 1999-2010, he held the position of the Director of the IT Systems Development and Maintenance Department in Bank Pekao S.A., and since 2006 he managed the Information Technology Division of the Bank. His responsibilities included integration of IT systems of four banks: Pekao S.A., PBKS S.A., BDK S.A., PBG S.A.

He was a member of the Supervisory Boards of the companies belonging to the Bank Pekao S.A. Group and to the PKO Bank Polski S.A. Capital Group.

In 2010 - 2016 he held the position of the Vice-President of the Management Board supervising the Area of Information Technology and Services at PKO Bank Polski S.A.

He graduated from the Faculty of Mathematics and Physics at the Adam Mickiewicz University of Poznań.