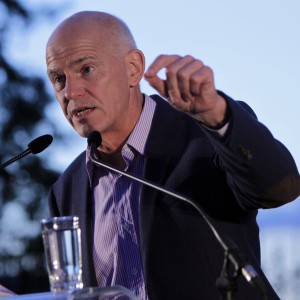 George A. Papandreou (born June 16, 1952), former Prime Minister of Greece, is President of the Movement of Democratic Socialists, and President of the largest global organization of progressive political parties, the Socialist International.

As Prime Minister of Greece, George Papandreou was at the forefront of the global financial crisis and, through complex and difficult negotiations, he managed to avoid his country’s bankruptcy, at the same time applying a series of structural reforms to modernize Greece. He was also a pioneer in introducing new technologies for promoting transparency, improving governance and including citizens in legislative process. For this reason he was named one of Foreign Policy magazine’s Top 100 Global Thinkers in 2010 for “making the best of Greece’s worst year.”

As Foreign Minister from 1999–2004, he was widely praised for his diplomatic bridge building. He successfully negotiated better relations with former rival Turkey. He played a key role in the negotiations that led to Turkey’s European Union (EU) candidacy in 1999 and Cyprus’s entry into the EU in May 2004.