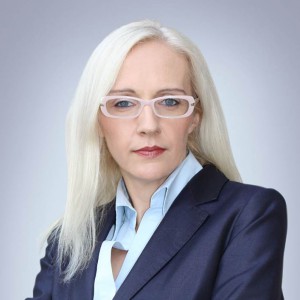 In 2016 and 2017 she was a awarded by Staffing Industry Analysts as one of the 100 most influential women in the global HR sector. She has completed French-Polish postgraduate management studies at the University of Poznań and Rennes (2003) and Technical-Agricultural Academy in Bydgoszcz, Marketing and Management, with a specialty in Marketing and Management in Economic Organization (2001). She also graduated from Naval Academy in Gdynia, (Management and Marketing, Business Management; 2001) and studied Classical Philology at the Mikołaj Kopernik University in Toruń.

She gained professional experience at the Work Service as a Customer Service Department Director (from the 15th of April 2008 to October 2010 ) and Regional Director (from the 1st of September 2005 to April 2008), she also managed the Work Service branch in Bydgoszcz (from the 1st of September 2003 to 31st of August 2005). Before, she conducted economic activity in the field of promotion and marketing (from 1997 to 2003), she worked as a journalist and the editor-in-chef at the „Pomoże” radio in Bydgoszcz (1993 – 1995), and as a promotion specialist at Pomorska Newspaper (1995 – 1996).