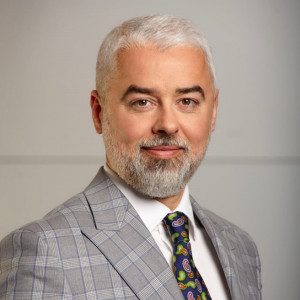 Gheorghe Marian Cristescu began his adventure in the hotel industry over 20 years ago. He acquired professional experience in Polish and international companies, including 3 years at the Radisson chain, over 10 years at Accor Hotels, and then at Best Western. In February 2015, he was named Director for Poland and the Baltic Countries, Best Western International.

From April 2016 until January 2019, he was Chairman of the Board of Chopin Airport Development – a company established by Przedsiębiorstwo Państwowe „Porty Lotnicze” (PPL) with the mission to carry out investment projects next to airports.

From January 2019, G. M. Cristescu has been Chairman of the Board of Polski Holding Hotelowy (PHH); the company’s objective is to consolidate the management of state-owned hotels. PHH’s task is to create a strong and professional Polish hotel management entity, competitive in the industry, that will efficiently manage hotels by implementing modern procedures, improving profitability or adjusting a hotel standard in connection with a possible introduction of a hotel brand.

At present, PHH’s portfolio comprises 8 facilities located in Warsaw, Katowice, Gdańsk, Międzyzdroje and the Hel Peninsula. Two hotels in Poznań and Rzeszów will be opened soon. In addition, under the management agreement with PHN, at the end of 2020 and the beginning of 2021, PHH will open Moxy & Residence Inn in Warsaw. As a franchisee, it cooperates with leading global hotel chains, such as Marriott International, Hilton International, Best Western Hotels & Resorts, InterContinental Hotels Group and Louvre Hotels Group.

Since September 2017, Gheorghe Marian Cristescu has been Chairman of the Social Tourism Council of the Ministry of Sport and Tourism. Among other awards, he was given “Man of the Year 2018” special award by Hotelarz monthly; named “Personality of the Year 2012” by Hotelarz monthly and “Man of the Year” in the Prime Property Prize 2012 plebiscite; and became chosen by HRS portal as “Hotelier of the Year 2013”. As the unquestioned leader and specialist of the hotel market in Poland, he regularly appears as a panellist in the most important industry events.

In addition to his professional work, he is interested in sports, history and geography. He speaks Romanian, Polish, English and Spanish fluently.