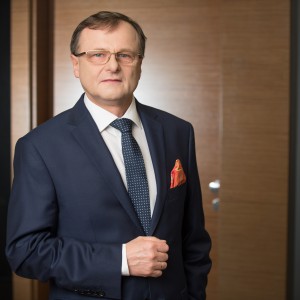 He graduated from the Economic Academy (currently University of Economics) in Katowice, specializing in finance and accounting. In 1989 he began his professional career as an accountant, finance specialist and Chief Accountant in private limited liability companies. Then, from 1992 to 1998, he provided accounting, tax and legal and economic advisory services running his business activity. He conducted training workshops on the subject of taxes, accounting and mandatory prevention of the introduction of funds originating from illegal or undisclosed sources into financial circulation. He also worked as an auditor for the National Cooperative Savings and Loans Organization (Krajowa Spółdzielcza Kasa Oszczędnościowo-Kredytowa).

From January to November 2007 he was Secretary of the State in the Prime Minister’s Office and Deputy Chairman of the Standing Committee of the Council of Ministers. From 2007 to 2011 he served as the Vice-President of the Supreme Audit Chamber.  He acted as an expert in the twin cooperation project to strengthen the audit potential of the Audit Authority in Georgia and Albania. He has also worked for the EUROSTAT Working Group tasked with the preparation and development of European Public Sector Accounting Standards.