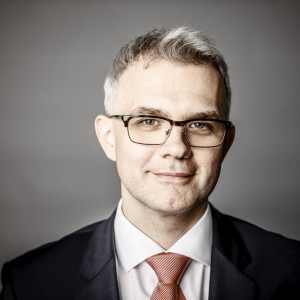 A graduate of the Warsaw School of Economics (2004), he also studied at Al Akhawayn University in Morocco. Holds a PhD degree in Economics (with honours, from ALK 2009). Has authored publications and papers delivered at international conferences.

Since June 2016 working for Grupa LOTOS S.A. In 2016–2018, he was responsible for Strategy and Development, and from March 2018 – for Finance. Since May 2018 has held the position of the President of the Management Board of Grupa LOTOS S.A.

Between 2012 and 2016, he worked in Frankfurt am Main as Director at Deutsche Bank AG (most recently – Director at Group Management Consulting). Earlier (2010-2012) had been employed as manager at Peppers and Rogers Group Middle East in Dubai, and between 2004–2010 at McKinsey & Company as consultant and senior consultant with projectexperience in numerous countries.

He is fluent in English (as a holder of an International Baccalaureate Diploma, and having worked for multiple years exclusively in that language). In addition, he has a good command of German (having worked at DB AG in Frankfurt am Main), and has mastered the basics of Arabic – both standard and Moroccan dialect (language courses at the Arabic Language Institute in Fez, Morocco; studies at Al Akhawayn in Ifrane, and several years of workexperience in the Gulf countries).