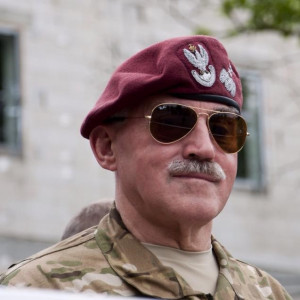 General Mieczyslaw Bieniek was born in Krapkowice, Poland, on 19 June 1951. He joined the Polish Army as an Officer Cadet in 1969.

Promoted to Lt Col in 1989, he was appointed as COS and then CO (Commanding Officer) of the Polish Contingent in the UN Mission - UNDOF until 1991. Then following a tour of duty as Section Chief in OPS (Operation) Division of Cracow Military District, he served as Chief Logistics Officer in  UN Mission - MINURSO until 1993 as a special envoy of UN General Secretary.

In 1994, upon his promotion to Colonel, he assumed the command of 6th Air Assault Brigade in Cracow. The following year he attended the Royal College of Defense Studies in London graduating in 1996, followed by command of 25th Air Cavalry Division. The same year he was promoted to the rank of Brigadier General. In 1997, he attended the Senior Defense Management Course in Monterey, California.

In 1999, General M. Bieniek took over Nordic-Polish Brigade Command in SFOR (Stabilization Forces in Bosnia and Herzegovina), and successfully commanded the Brigade for over 7 months, where he was effective dealing with three hostile entities (Serbs, Bosniacs and Chroats.)

In 1999, he became the Chief of Crisis Management Division in Polish MOD (Ministry of Defense), and adviser to Polish Minister of Defense for . At the end of the year he was assigned as Chief of Exercise, Education and Training Branch in SHAPE (Supreme Headquarter Allied Power Europe) in MONS, Belgium. At that post he was responsible for al issues related to exercise, education and doctrine implementation within the NATO and partner Nations.

In May 2002, he became Deputy Commander of 3rd Corps NRDC (NATO Rapid Deployable Corps  -Turkey. From January to July 2004 he successfully commanded Multinational Division Central-South in Iraq during the operation "Iraqi Freedom". Division has included 23 Nations. Then, he was appointed as 2nd Polish Mechanized Corps Commander in Cracow. On 15th August 2004 he was promoted to the rank of Lieutenant General. Between January and August 2007 he was assigned as a Special Envoy of the SACEUR in Afghanistan, where he served as a special advisor to Minister of Defense. As such he was responsible for advising in terms of organization, doctrine, equipment and training of the Afghans National Security Forces.

From October 2007, he served as a senior military advisor to the Polish Minister of Defense. In April 2009 Lt General M. Bieniek was appointed as the Polish Military Representative to the NATO and European Union Military Committees in Brussels -Belgium,being responsible for political strategic issues including NATO Defense Planning Process. On 29thSeptember 2010 he assumed the position of Deputy Supreme Allied Commander Transformation where he served until September 2013. In November 2010 he was promoted to the rank of the four-star General. As such he was working for defense and security at the higest level. His work contain issues of concept, doctrine and capabilities as well as planning at the political - strategic level with all NATO and partner nations.

So far it was the highest position which was taken by Polish general in NATO Command Structure.

He retired from active service in 2014 and now he is a senior councilor in the Polish Armament Group as well as professor of the Cracow University.

General Bieniek's education includes the Polish Army Academy and Polish Armed Forces General Staff Academy , Royal College of Defense Studies in London and Naval Postrgaduate School in Monterrey in USA. He also holds a Master of Arts Degree from Cracow Physical Education Academy and a PhD in International Security from Polish NDU (National Defense University). He is also an author of the many articles and books about International security and strategy as well as cyber and energy security.

He is also a member of Euro-Atlantic Association  as well a president of Parachute Section in the “Wawel “ sport club in Cracow.

In addition to English he is also fluent in Russian. General M.Bieniek has been awarded the Commanders Officer's Cross and Bachelor Cross of the Order of Rebirth of Poland, Golden Cross of Merit, US Bronze Medal of Merit and Legion of Honor of the Spanish Kingdom, medals for operations in NATO and UN and many others. His interests include history, literature and sports, especially tennis, snowboarding, windsurfing,kitesurfing and parachuting. He holds the Jump Master qualification for both military and civilian parachuting, with more than 3500 jumps under his belt.

Moreover he is qualified to jump together with US, UK, Norwegian, Turkish, German and Belgian Airborne Units.