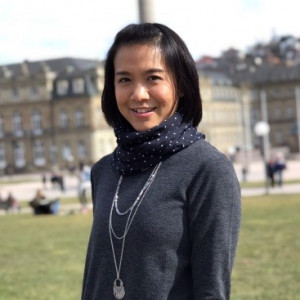 Ms. Yordkamon Suthirapojn has been working with Thailand Board of Investment since 2008 as an investment promotion officer.

She has experiences in investment promotion in various industrial sectors including Metal and Non-metal Industries, Basic Materials for Manufacturing Industries, Metal Products, Machinery and Transport Equipment and other related sectors.

Ms. Yordkamon’s work experiences combine the manufacturing field in the real sector (automotive), laws and regulations regarding the industrial works and investment promotion. Prior to entering the BOI, Dr.Ratchanee spent four years as an industrial engineer in at the car manufacturing company, four and a half years as a government officer at the Department of Industrial Works (Ministry of Industry) and also two and a half years as a public sector development officer at the Office of Public Sector Development Commission.

On March 9th 2017, she has been posted as the deputy director of Thailand Board of Investment, Frankfurt Office, to be responsible for attracting and facilitating foreign direct investment from nine countries in Central and Eastern Europe (Germany, Switzerland, Austria, Belgium, Netherlands, Luxemburg, Hungary, Poland and Czech Republic) into Thailand.

At the same time, she has been accredited as Vice Consul (Investment) of Investment Section of the Royal Thai Consulate-General in Frankfurt am Main which is assigned to implement and achieve the duties in the above mentioned nine countries.