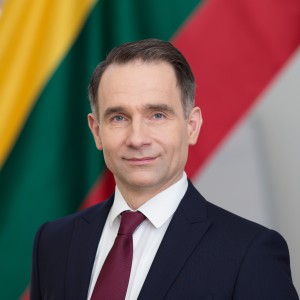 Rokas Masiulis was appointed Minister of Transport and Communications of Lithuania in 2016. Previously, Mr. Masiulis served as Minister of Energy.

Before joining the Government Mr. Masiulis served as CEO and later also as a member of the Board of Directors at the state-controlled oil terminal operator, SE Klaipėdos Nafta. During his term as CEO of Klaipėdos Nafta, Mr. Masiulis was in charge of the implementation of LNG terminal project. LNG terminal has started its operation in December 2014. Mr. Masiulis was also CEO of Lithuania‘s natural gas trading company LITGAS and Director of Business Development as well as Finance of LEO LT, an electricity holding company. For 14 years Mr. Masiulis held a number of senior positions at Energy practices of “Arthur Andersen” and “Ernst & Young“. His regional focus covered Lithuania, Latvia, Estonia, Belarus, Russia, and Kazakhstan. Minister Masiulis holds a degree in International Relations and Political Science as well as Master’s degree in Economics from Vilnius University.