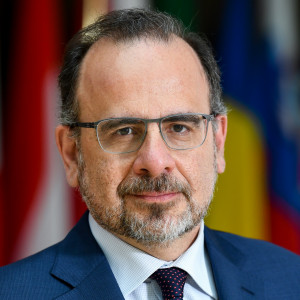 Luca Jahier has been elected President of the European Economic and Social Committee (EESC) on 18 April 2018 for a period of two and a half years, until October 2020. He has been a member of the Committee since 2002. Within the EESC, he has worked extensively on the European Union's social and cohesion policies, as well as on international matters.

In September 2004, he was elected vice-president of the EESC's Section for Employment, Social Affairs and Citizenship.

In October 2006, he was elected vice-president of Group III, member of the Committee Bureau for two years and member of the EU-Croatia and EU-Turkey Joint Consultative Committees.

In October 2011, he was elected president of Group III of the EESC, and was re-elected in January 2013 and in October 2015. In this capacity, he has been a member of the EESC's Bureau. Over the course of three terms in office as president, Group III carried out nine studies, and held 42 conferences in 17 EU countries attended by thousands of people and countless meetings with European civil society organisations.

He was nominated unanimously by Group III for the post of EESC's President.

At the EESC, Mr Jahier has been rapporteur for many opinions, such as The prospects of the social economy in Africa, EU-Africa cooperation with China, Article 11(1) and 11(2) of the Lisbon Treaty, For a Social Dimension of European Economic and Monetary Union, Towards an EU strategy for international cultural relations and Lisbon Treaty – EP Opinion.

President of the national council of ACLI, a Christian Associations of Italian Workers which promotes, through its network of local branches, services, enterprises and ad-hoc projects employment and active participation in social life (2008- 2012)
Founding member of the Italian Third Sector Forum
President of FOCSIV, the federation of development cooperation NGOs (1994 to 2000)
Active in the field of International cooperation, first with CISV (Comunità Impegno Servizio Volontariato, an Italian voluntary service organisation) in Turin and then with networks and associations of national and European NGOs (1980-2000)
Journalist, international political analyst
Expert in the field of associations for social advancement and the third sector, responsible for development programmes in Africa and elsewhere.