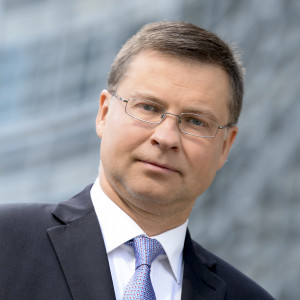 Valdis Dombrovskis is the Executive Vice-President of the European Commission responsible for an Economy that works for people. His portfolio involves preserving and improving financial stability, building a future-ready economy that delivers jobs, growth and investment, strengthening the role of the euro, and putting social rights, protection and fairness at the heart of our modern economy. He was also Vice-President of the European Commission from 2014 to 2019, responsible for the Euro and Social Dialogue, and in charge of Financial Stability, Financial Services and the Capital Markets Union. Before that, he served three consecutive terms as Prime Minister of Latvia, becoming the longest-serving elected head of government in Latvia’s history. Before becoming European Commission Vice-President, Valdis Dombrovskis was elected for the second time as a Member of the European Parliament (first, 2004-2009) and Head of the Latvian Delegation in the EPP Group. He served as a Member of the Saeima (Parliament) of Latvia (March 2004 - June 2004; January 2014 - June 2014) and was Latvia’s Minister of Finance from 2002 to 2004.

Valdis Dombrovskis was born on 5 August 1971 in Riga, Latvia. He graduated with a degree in physics from the University of Latvia (1993) and economics from Riga University of Technology (1995). He received his master’s degree in physics in 1995 from the University of Latvia. In 1995 -1998, he worked as a research assistant at Mainz University, Germany, at the Institute of Solid-State Physics in Latvia and at the University of Maryland (USA). Prior to joining politics, he worked as a senior economist and Chief Economist at the Bank of Latvia (1998-2002). Together with Anders Aslund, he co-authored the book "How Latvia came through the financial crisis”, which was published in 2011. In November 2014, Valdis Dombrovskis was awarded the Order of the Three Stars (Triju Zvaigžņu ordenis), the highest State Decoration of the Republic of Latvia.