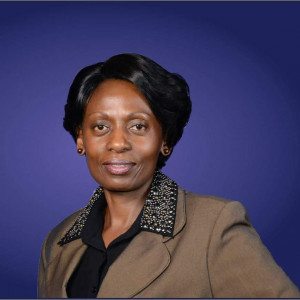 Firma: former Permanent Representative of the Republic of Kenya to the United Nations

An advocate of democracy, good governance and sustainable development, Ambassador Dr Josephine Ojiambo champions Global Partnerships in the implementation of the Sustainable Development Goals with a strong emphasis on vulnerability including ensuring refugee and migrant rights, gender equality and reproductive health and rights. She has a distinguished public and diplomatic service career.

Between 01/2015 and 01/2018, she served as the Deputy Secretary-General at the Commonwealth Secretariat in London -a multilateral organization that brings together 54 countries in 5 different regions of the world with a combined population of more than 2.4 billion people. Josephine managed a core budget of approximately GB£ 30.0 million, and a dedicated team of professionals working in the most difficult and challenging contexts of the world. She provided strategic oversight and direction to the Human Rights Unit. She also led the Political division that included the Rule of Law and Communications directorate, and the Economic, Social and Sustainable Development directorate. She steered open and constructive high-level policy discussions on human rights, migrants and refugee issues and supervised analytical work that underpinned many of the Commonwealth's achievements including: the adoption of, by some members, national legislation on equality; and the 2015 adoption of the St Julian's Declaration on Migration by the Commonwealthosulamalimba@gmail.com Heads of Government. During her tenure, she set up new Commonwealth work programs that focus on (a) advancing women’s political participation, and (b) ending early and forced marriages.

Until 05/2018, she was the President of the Rotary Club of Westminster West, in London. In this role, she supported global action and policy responses to the longstanding humanitarian and development challenges in the Global South including the Global Polio Plus campaign, peacebuilding activities and stronger partnerships with the United Nations.

As the Chief of the UNFPA External Relations and Executive Board, she was responsible for the intergovernmental as well as external relations of the Fund. She contributed to multilateralism and supported the work of the United Nations General Assembly related to the negotiation, implementation and reviewof the United Nations International Conference on Population and Development (ICPD)Programme of Action. Previously, she served as an Ambassador to the United Nations in New York where she advanced, promoted and protected her country’s interests. Among her notable contributions to the United Nations General Assembly include intergovernmental work on the Arms Trade Treaty that has, among others, provisions on the protection of women and children.

In 2007, she worked alongside Secretary-General Kofi Annan on addressing the post electoral violations. She also helped develop a social cohesion strategy for the government and peoples of Kenya and successfully contributed to steering the country through a period of Constitution making and transition in political leadership. She was also a national task force member that recommended the formation of the Truth, Justice and Reconciliation Commission.

She served previously as an elected Gender Secretary, and later, Secretary General of the largest and oldest political party in Kenya, KANU. She was also a member of the National Executive Committee of the Party of National Unity.In the early 2000s, she served as the President of the Kenya Medical Women’s Association which steered national policy discussions that led to the ratification of the Children's Act.

Throughout her career, Josephine has been deeply engaged with a range of significant national, African and global issues. She currently sits on the Governing Bodies of several influential international advisory groups and think-tanks, including: The Rotary International Board; the Peter Ojiambo Foundation; the Medical Women's International Association; the Charities Commission of UK; The Women’s Democracy Network of the International Republican Institute: the Pan African Women’s Network; the International Council for Caring Communities: the Fund for the Disabled of Kenya: and Green Belt Movement founded by Wangari Mathaai.

Josephine has a Master’s Degree from the Hebrew university of Jerusalem, Israel, and a Bachelor’s degree In Medicine and Surgery from the University of Nairobi, Kenya. She also has Certified Skills in International relations and diplomacy, and mainstreaming women in development among others.

Born in Kenya, she is fluent in English and Swahili and has a working knowledge of French. Josephine is a mother to four children.